The Sanctuary of Torreciudad is located near the town of Barbastro, in the Huesca province. It belongs to the Aragonesse Ribagorza county, but it is located very close to other two important counties: “Somontano” and “Sobrarbe”. This modern sanctuary, placed just a few meters away from the antique shrine, is a meeting point for many groups an families. It is known as the Sanctuary of the Families.

The devotion to the Virgin of Torreciudad 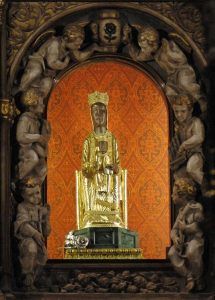 The image of Our Lady of Torreciudad is a Romanesque elm wood carving statue. It shows brilliantly the primitive facial expressions of the Virgin Mary and Child.
According to tradition and corroborated by historians, this image was venerated even before 1084. Due to the Arab domination, the image was hidden and later recovered near the hermitage (when the land was reconquered by the Christians).

The love professed to Our Lady by Saint Josemaria made him work hard to see the sanctuary become a reality. Years before and after a surprising recovery from a serious illness, he was taken by his parents on a pilgrimage to thank the Virgin for such a recovery.
The image was covered with a gold layer. This layer enhances the dignity of the image and it is considered a great example of interest from both, the historic and artistic point of view.
This type of iconography is the kind known as the “Majesty of Our Lady” or “Sedes Sapientiae”. It was widely used during the High Middle Ages. 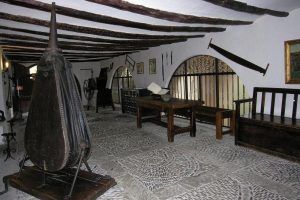 The old hermitage that is located near the sanctuary is the place that housed the original image of the Virgin of Torreciudad.
Today, just like throughout nine centuries of history, this small hermitage remains as a pleasant meeting point for the people of the neighboring shires, as they frecuently celebrate mass, weddings, anniversaries and other events there. 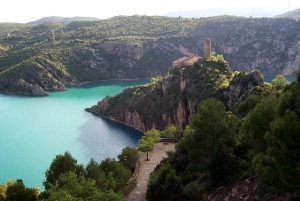 Torreciudad is today a meeting and pilgrimage point for thousands of people and it is one of the most visited places in the Pyrenees. This modern sanctuary was placed just a few meters away from the old shrine (origin of the devotion to virgin of Torreciudad around the 11th century).

Dedicated to Virgin Mary, the history of the new sanctuary begins in 1956, thanks to the love to the Virgin of Saint Josemaría Escrivá de Balaguer, founder of the Opus Dei. He had the idea of building it there. A group of people supported this initiative and worked hard to found this sanctuary. The architect Heliodoro Dols was in charge of the direction of the works, which began in 1970 and ended five years later. 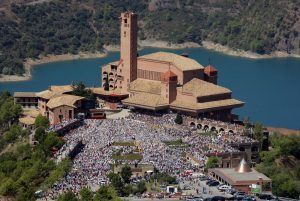 The set (square, temple and the adjoining buildings) stands out due to the variety of avant-garde forms. They give the sanctuary a very personal style.
At the same time, it was conceived as very plain and modest construction. It presents a creative construction based on the use of traditional Aragonese elements such as stone, alabaster and mainly bricks.
The square, built to welcome thousands of pilgrims and visitors is a place to celebrate mass, events and other celebrations for massive audiences. The stone arches allow the view of the ‘El Grado’ (lake) blue waters  and the snow-capped summits. The bricks (humble material) provide Torreciudad with a very familiar and human dimension.
the Holy Mass and other acts are celebrated at the esplanade whith a big attendance of pilgrims. 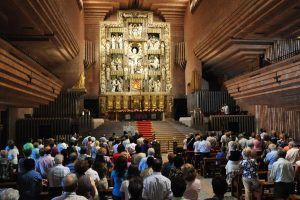 The interior of the temple is an invitation for prayer and meditation. An ambiance of peace and serenity is perceived when entering the building. It is an immediate feeling for pilgrims and visitors. The moment you get in, all the looks are directed to the great altarpiece that dominates the inside of the nave. The altarpiece was sculpted in alabaster by Joan Mayné. Different scenes of Virgin Mary are represented on this piece. The bottom side is reserved for the holy image.

Very close to the altarpiece and on top of a pedestal, there is a sculpture of Saint Josemaría Escrivá de Balaguer. It was placed there after being sanctified.

Another area of importance inside the building is the chapel of the Blessed Sacrament, dominated by a bronze image of a crucified Christ made by the Italian artist Pasquale Sciancalepore. Visitors and pilgrims have access to the Virgin´s Medallion through a door located in the right side of the presbytery. This is a medal that pilgrims kissed in the past and continue kissing today.

The gallery of the Marian Images 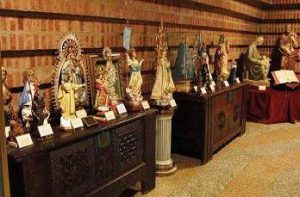 The gallery of the Marian Images is a gallery with different representations of Virgin Mary. It’s located in one of the hallways and has replicas of the patron saint of other sanctuaries. They were given as present when people form different parrishes arrived on pilgrimages. Everything began in 1984 during the 11th Centenary of Torreciudad. Nowadays there are almost five hundred images on display.
The gallery is not a museum or a collection that tries to grow every year. It just wants to be a true testimony of the love and devotion to the Virgin shown by large or small groups, arrived to Torreciudad in a Marian pilgrimage. 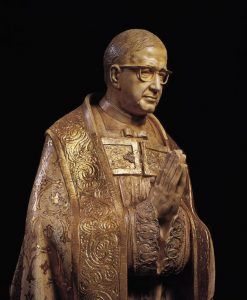 He got seriously ill when he was 2 years old. When doctors did not give him any chance of survival, his parents prayed to the Virgin entrusting her with his recovery. Months later and after a surprising recovery, the parents when on a pilgrimage to the Torreciudad hermitage. This was done as a gesture of gratitude.
He received the priestly ordainment in Zaragoza . Later on he moved to Madrid. He founded the Opus Dei in 1928. He escaped to France when the civil war started. He would later come back but he set his residence in Rome. He got his doctorate in Theology and he was appointed His Highness Prelate of honor .
Moved by his love to the Holy Virgin, he promoted the construction of a new sanctuary in Torreciudad. With the construction in progress, he visited the construction site in 1970 and 1075 (just a month before dying).
He died in Rome on June 26 1975. On May 17 1992, Pope John Paul II beatified him and proclaimed him saint ten years later. His body rests in a funerary urn located under the altar of the Saint Mary of Peace Church in Rome.

Opening hours for the sanctuary
FROM 01 NOVEMBER TO 28 FEBRUARY
From 10am to 2pm and from 4pm to 6.30pm, from Monday to Friday
From 10am to 7pm, Saturdays and Sundays